I Had a Baby and My Push Present Was Postpartum Depression.

(For a real-time feel for this piece, please go pace around the room you’re in, text GIFS about your emotional state to your significant other, and scour the internet for the idiot who came up with the term “Baby Blues,” who you know has to be a dude because no woman who has ever experienced the reeling post-partum months would describe them as something as patronizing as “Baby Blues.” For added good measure, day dream about kicking that person in the shins repeatedly.)

So far, I have managed to write 141 words without any of those words being the actual thing I’m supposed to be writing about.

This is so much easier. I can count words all day. All day, son! (I’ve also been watching a lot of New Girl reruns to avoid writing this post)

Okay, I’m done. Let’s get to it. The fun and exciting world of postpartum depression (PPD)! Or how I’ve been referring to it in my head for the past 3 months: “WHAT IS THIS ACTUAL LIVING HELL?”

While I was still pregnant with Teddy, I had really high hopes for what the days and weeks after his birth would look like. Dan and I have had serious discussions about this pregnancy being the final one, and I really wanted to soak in all that new baby goodness one last time. The transition from two to three kids had been as easy as it gets, so while I was slightly worried about taking care of four, I wasn’t expecting it to be so completely opposite of when Matty had been born. For one thing, Matty immediately began trying to destroy his replacement as baby of the family. Teddy had scratches on his face from Matty for two solid months. One scratch would heal, and Matty would replace it with another. It was like Toddler Hunger Games. And that slight worry I had while pregnant about taking care of four kids, turned into full blown anxiety as soon as we came home from the hospital.

Our first day home, I told Dan that it felt like we went from three kids to one hundred kids. Everything was louder and crazier and harder. So much harder. We kept saying, “This will get better. Everyone is adjusting now, but soon it will get better.” I was experiencing all the normal roller coaster feelings birth brings (the ones that make you sob uncontrollably when someone leaves a pen in their pocket and it ruins a few shirts in the laundry. A totally random and hypothetical example…). Weeks went by but instead of things getting better, or even just leveling out, I was feeling worse. I was overwhelmed all the time. I had serious doubts about my mothering abilities (the fact that I couldn’t stop one son from trying to beat up the other one did not help curb this feeling). I worried constantly. I cried a lot. When I wasn't feeling a crushing sense of self hate, I felt numb. I started having panic attacks. Like, actual chest tightening, can’t breathe properly, curl into the fetal position panic attacks. I didn’t even know that’s what was going on at first, I just thought I was losing my mind.

I felt so alone. I didn’t know how to talk about or describe what I was going through. People would ask how life was going and I’d say vague things like, “Oh, it’s a little bit crazy right now. But overall it’s fine.” I used humor to deflect how paralyzed with guilt and shame I felt (healthy coping mechanisms, y'all). The longer I went without verbalizing my brokenness, the more isolated I felt. I began to dread going to family get-togethers. There was more than one Saturday night spent trying to calm myself down because the thought of going to church the next morning sent waves of anxiety crashing against my heart. There, I was surrounded by some of the people I love most in the world, but because of my inability and unwillingness to speak about the state of my life, I felt completely unknown. It filled me with a deep, heavy grief.

I couldn’t describe the depths of what I was experiencing to my own husband. Before we had even put a name to it, postpartum depression stripped away the ease and confidence normally shared between us. I felt like a shell of myself, and was convinced that admitting how much a broken mess I was would change how he viewed me, how attractive he found me. One morning, Dan put his arms around me and said, “I love you. You are strong. You will get through this.” Instead of being comforted like he had intended, I lashed out. “I am not strong and OBVIOUSLY I am not getting through this!” He was confused and helpless. I was furious and heartbroken. PPD took the short hand talk of our marriage, and replaced it with two entirely new languages. We couldn’t understand each other.

That particular moment was a tipping point. It was now painfully obvious that what I was experiencing was more than adjustments to our new life, or the “Baby Blues” (again, mentally shin kicking the person who coined that term). The day after Dan and I fought about the strength of my spirit, I made an appointment to see a counselor. Three days after that, during our church picnic, I blurted out to two close friends that I thought I had PPD. It was one of the most uncomfortable and awkward conversations I’ve ever had, mainly because I have wonderful friends who don’t just let me off the hook when things are hard (even when I beg not to talk about it anymore, because I definitely did that). My village stepped in. I wasn’t immediately better, but I also wasn’t alone.

I would like to tell you that everything is back to normal; that I feel completely restored to my former glory (that was a joke. My “former glory” is just me, covered in baby drool and talking to Dan in Hamilton raps). I’m not. I’m part way there. I feel more like myself than I have since Teddy was born (and even before he was born, to be honest. I don’t know if postpartum depression can start before you’re actually postpartum, but looking back I can see whispers of it all over my last month of pregnancy). There are more good days than bad, and the really bad days are further and further apart. I see a counselor every other week and will continue to do so for the foreseeable future. And even though it all makes me feel so awkward and uncomfortable, I am trying to commit to speaking PPD’s name, because it loses a little bit more of its scariness each time I do it.


(If you are experiencing postpartum depression, please seek help. A doctor, a counselor, a pastor, a friend. Don't convince yourself it's not a big deal, don't force yourself to deal with it on your own. Let's be committed together to speaking out and disarming PPD of its power.)

Edited May 2017: If you'd like to hear more about my experience with postpartum depression and anxiety,
I've included links to a 2 part series Dan and I did last year on our podcast,
More Often Marriage

From home schooling to WAIT WHERE ARE YOU GOING ALL DAY?

Last year we home schooled Ella. Actually, she has been home schooled since half way through kindergarten, but last year I took more of a structured approach (in the sense that I bought actual curriculum and didn't just rely on nature and some random work books I found at Target. Parent of the year, ya'll). She did great. In my completely unbiased opinion she kicked second grade's butt, and is possibly the smartest seven year old on the planet. Again, UNBIASED.

But as much as she excelled academically (and I'm taking next to zero credit here. Self motivated kids FTW), she was desperate to be back in an actual classroom again. Apparently a desk stuffed into a corner next to the wood stove while your siblings run around screaming their blonde heads off, doesn't feel like the ideal "learning environment." #highstandards

Long story short, with barely two weeks before the start of class, we enrolled her at the local charter school. Dan and I kept it all a secret until we had toured the school, exhausted both her principal and other parents with questions, and spent many nights simply saying, "I don't know. What do YOU think?" I wish we had thought to record her reaction when we finally told her, though. She hid her excitement for about 45 seconds, then switched to this mode and has been living there ever since.
Mabel and I took her to school this morning, while Dan stayed home with the boys (we wanted the morning to be as calm as possible for her and brothers be bonkers, ya'll). She chose to listen to "Maria songs" (The Sound of Music soundtrack) on the way there, and all I could think about as she sang along to The Lonely Goatherd, was that I would lay the smack down on anyone who tried to crush her beautiful, sweet spirit. It feels different, her first day in 3rd grade verse her first day in kindergarten. There's more at stake now, more for her to see and hear and discover from other kids, and it makes my heart tired and panicky. I thought about turning the car around at least a dozen times in the short ten minute drive.

But look at this face. 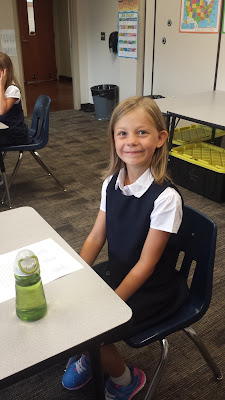 She was SO happy to be there. So calm and poised, quietly finding her seat and smiling at her new table mates. As her mother, I could see the tiny current of nerves flowing through her, but she didn't even look back as I said goodbye (which, I'm fine with. TOTALLY FINE). I even stayed outside the classroom door for a few extra seconds* to give her a last "good luck!" smile, and she never even turned to look.

*Roughly four minutes. I finally forced myself to leave so the other kids wouldn't think her mom was a giant weirdo. They'll find that out soon enough when I volunteer for ALL THE THINGS.

She had a full day today (on the first day! Come on, school! Don't you know mom---KIDS need to be eased back into this transition? RUDE), but it's almost time for us to go pick her up. Not that anybody has been staring at the clock, willing it to just HURRY UP ALREADY.

The Sacredness of Women Friendships

A while back, I wrote about the importance of community. That group of people who pick up your slack and fill in the gaps; who, sometimes, are the only reason you feel like you can push onward towards another day. This village is priceless and essential, not only for families, but for everyone. Married, single, parents, the childless, old, young--you name it, they need a village.

A Life in Parentheses